25 miles into the Backcountry 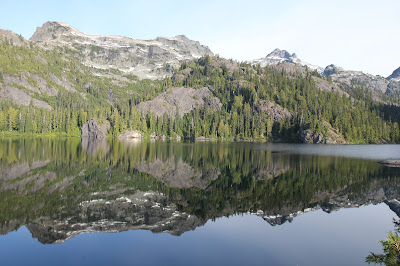 Joshua's backpacking list mostly has multiple day 20 miles or more hikes left on it. Since we had a 4 day weekend we decided to take one on. We drove out Friday morning and started our hike around 11am and headed 4 miles in to Pete Lake. Made lunch and let Roslyn out of the pack for a bit there and then started back at it. Most of the hike was pretty level, we had a deep river crossing, then rounded to a waterfall and then into the switchbacks up to Spectacle Lake, about 7 miles. 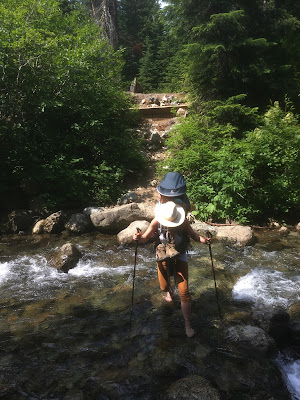 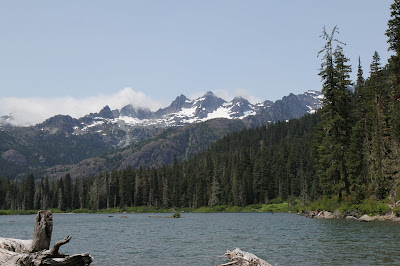 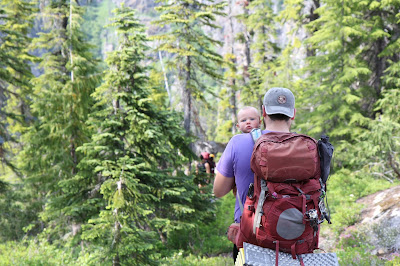 Roslyn is a busy body and we were so worried about her being in the pack for 11 miles. We were also worried about me being able to carry her and all her stuff that far and Joshua carrying the giant 100 liter pack with all his and I's stuff. To be fair by the end our backs and ribs ached and she got a little fussy at the end but we all made it in one piece and in pretty good spirits. 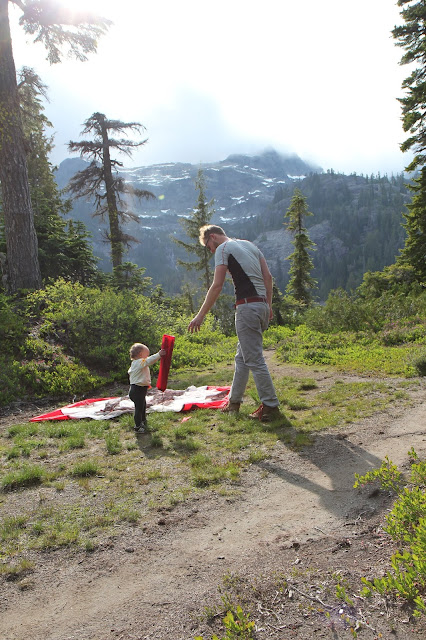 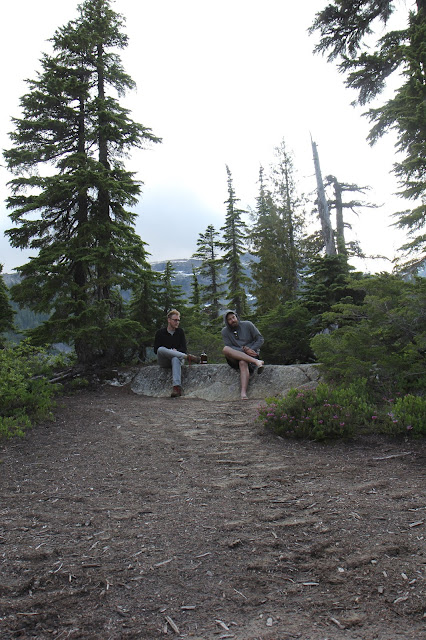 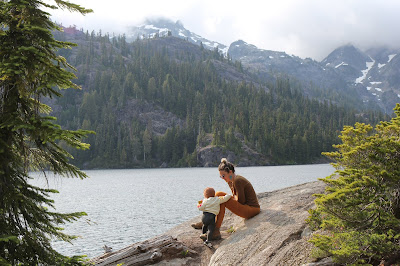 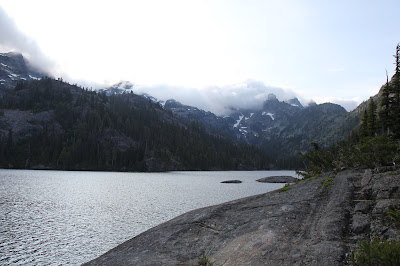 Once we made it to the lake Joshua and James scouted out a campsite and Roslyn got to get down and do some hiking of her own. She love climbing rocks and attempting to get over roots on her own. We secured a spot by the lake, Roslyn "helped" set up and we made dinner and starred at the water. Then her and I headed into the tent to put her to bed and the guys hung outside and played with a fishing pole (pretty certain the lake has no fish). 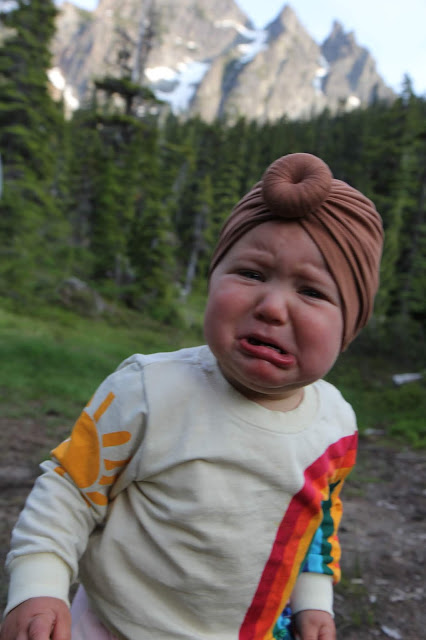 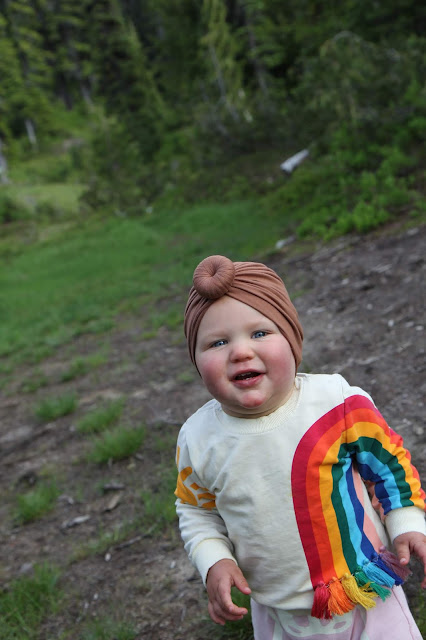 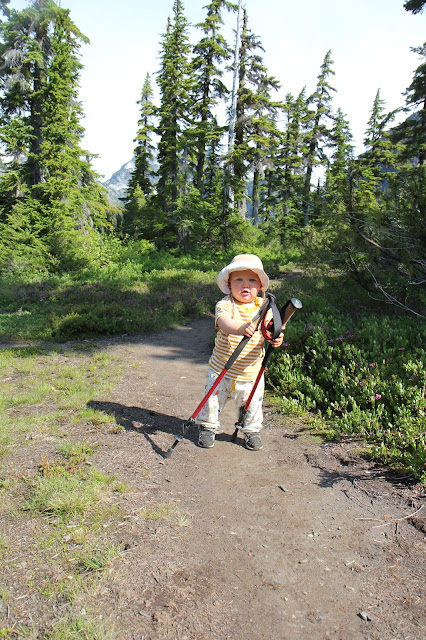 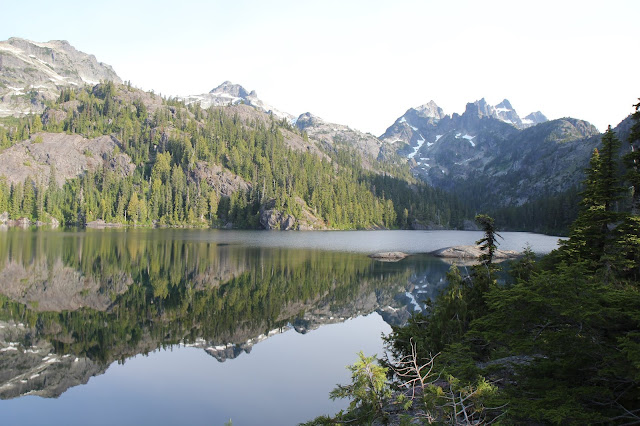 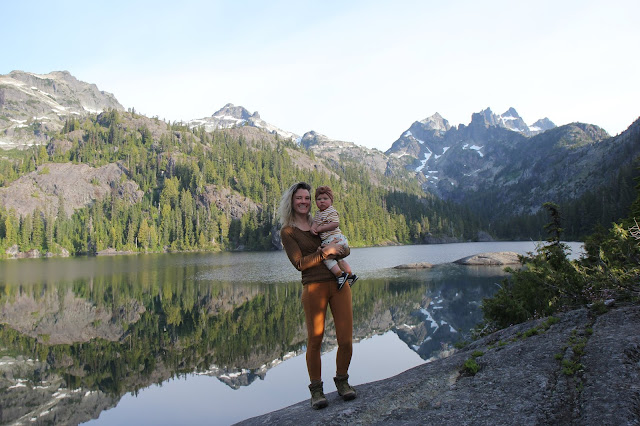 The next morning after breakfast we started getting very irritated by the mosquitos. Instead of sitting around whining about it we strapped Roslyn in her ergo and went hiking up to the pass. It was about a 2 mile day hike and it looked back down on Spectacle Lake and showed off a few more layers of mountains as we ascended, including Mt. Stuart. It was a beautiful morning, all were in good moods, Roslyn fell asleep about 5 steps in, and the bugs stayed away as long as we were moving. 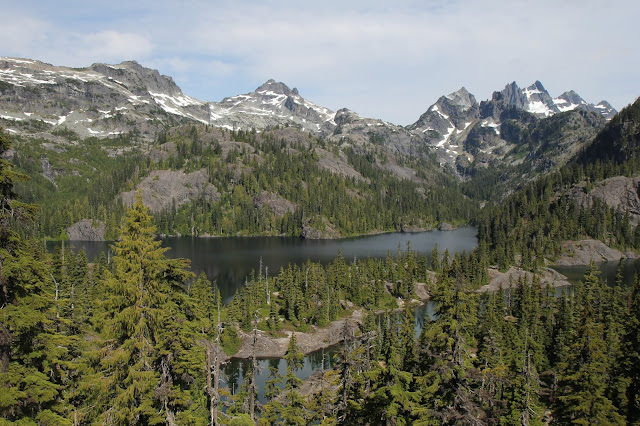 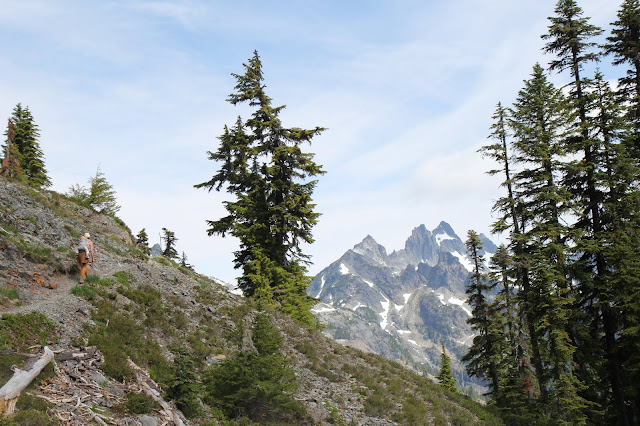 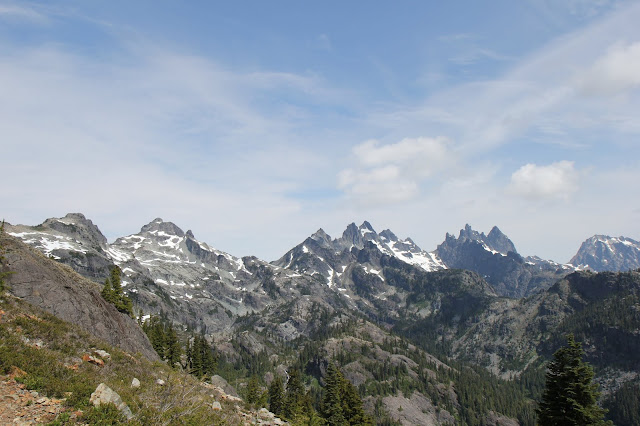 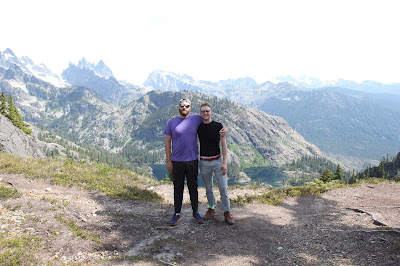 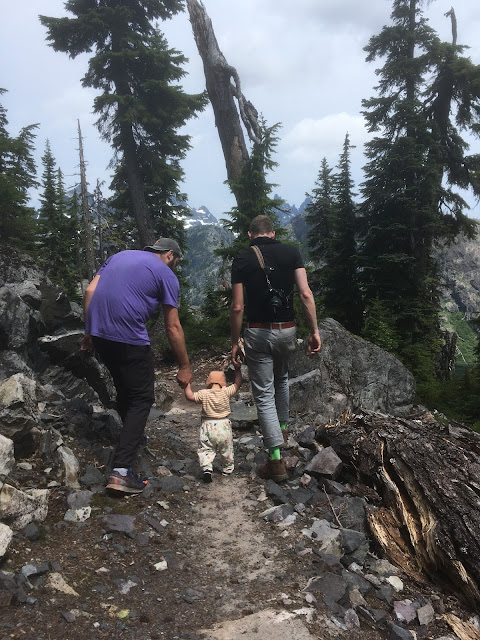 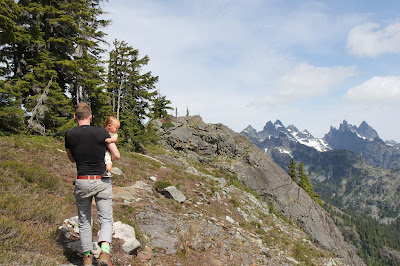 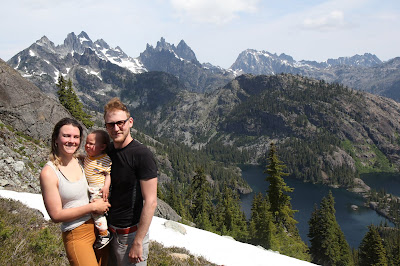 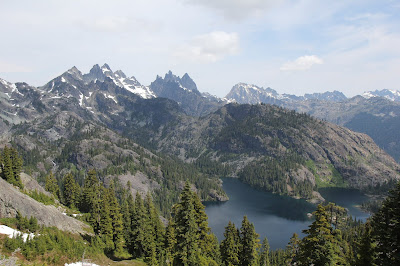 Then we hiked back down and jumped into the absolutely freezing lake. Which felt glorious once we were back out of the lake and drying in the sunshine. Don't worry Roslyn did not partake in the swimming. We hung out for the rest of the day played some cards, got Roslyn to nap again, made dinner, and played "fishing" again. 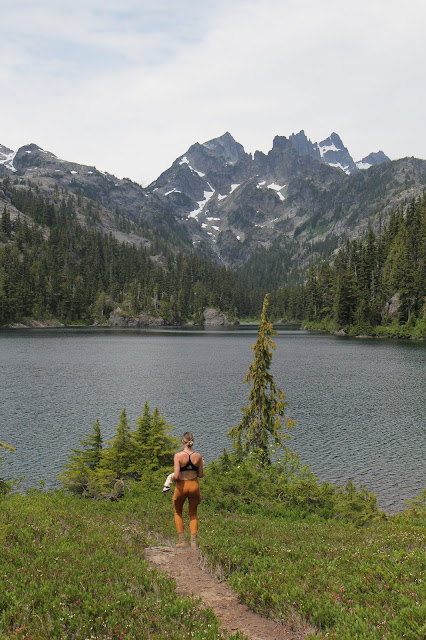 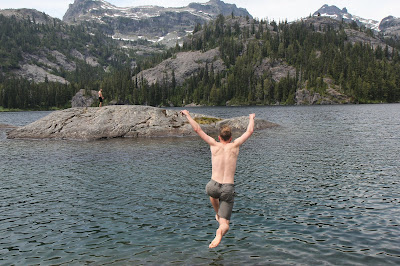 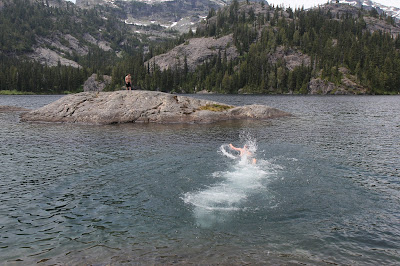 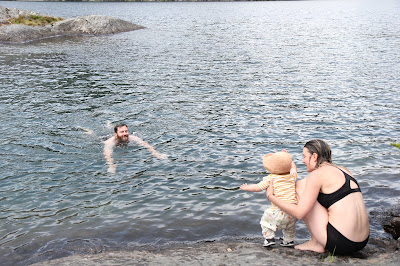 The next morning we packed up to hike out, took another break at Pete Lake and found our way out around 3pm. I cannot properly express how proud I am of Roslyn. She took all the hiking and being carried like a champ. We let her out to hike for portions, play in snow, dip her fingers in the water, pick flowers, etc but still it was a lot of being carried and she crushed it. I am also so so proud of us. We were scared to do this, to take this on, but we did it! And we had fun doing it! (minus the 300+ bug bites riddling my body, no joke) Also our friend James put up with someone else's one year old with a smile on his face the whole time! 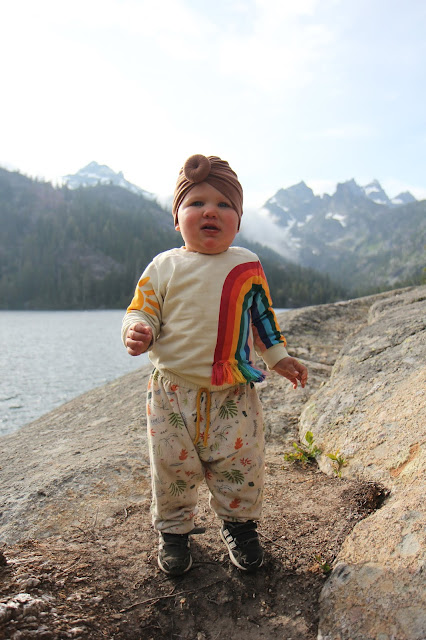 We all piled into Walter and drove down a forest road to sleep for the evening next to a river. I made sausages, mac and cheese, and beans for dinner with cookies for dessert, well deserved! The hammock was slung up and an epic game of pejabejaboo (peek-a-boo) was played by all. I finally got to sleep without a baby touching me all night and it was glorious. 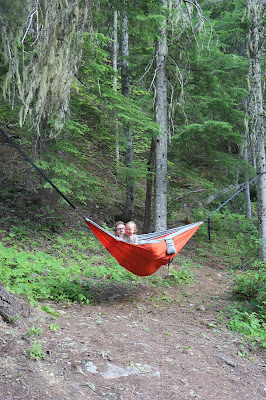 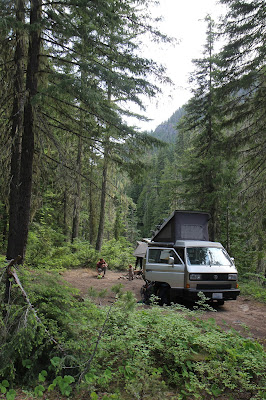 Next morning I made waffles, sausages, and eggs for breakfast with multiple cups of coffee. Roslyn played put all the rocks in her pail, stir, and repeat for awhile and we headed back into Seattle. Before dropping at home we stopped at Dick's burgers for a final celebration where Roslyn discovered milkshakes and totally stole mine. 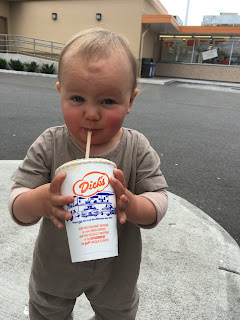